Published in the October 2017 issue of the Asian Art Newspaper. 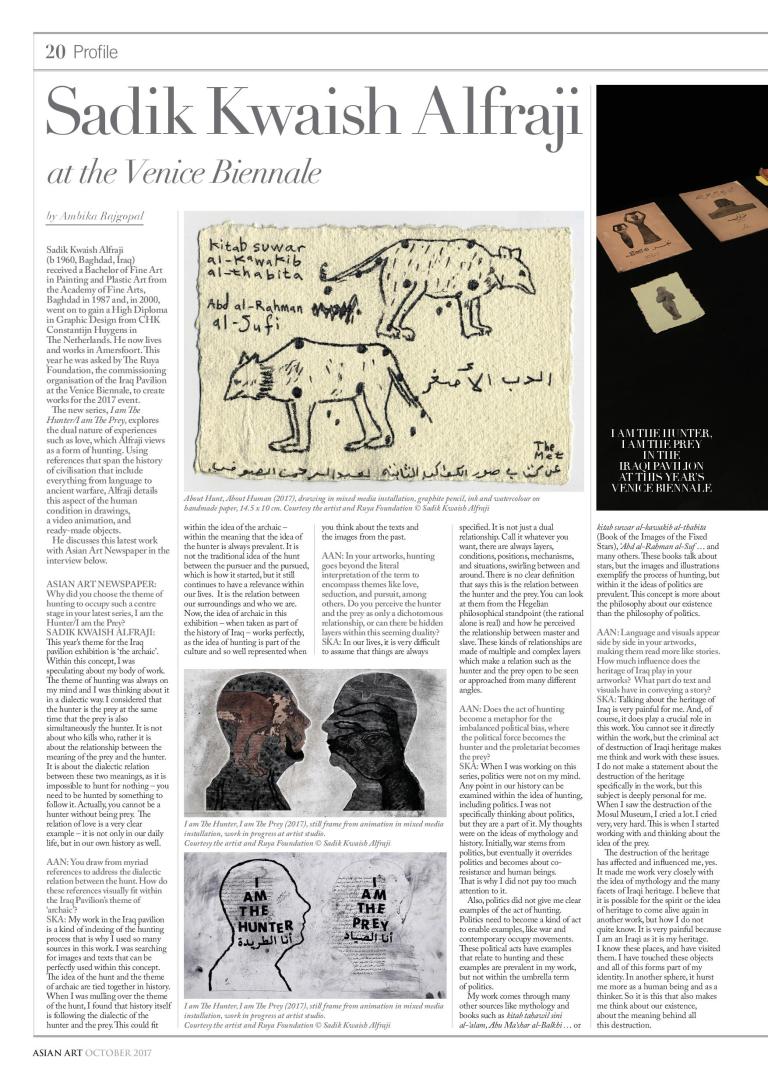 Sadik Kwaish Alfraji (b 1960, Baghdad, Iraq) is a multifaceted artist who brings to front ‘the problem of existence’ through a plethora of mediums like drawings, paintings, video animations, and installations. Originally trained as a painter and printmaker, the artist’s newly commissioned work I am The Hunter…I am The Prey (2017) forms part of the Iraq Pavilion’s exhibition at the 57th Venice Biennale. The series addresses the complexities of the human condition by piecing together various sources from history derived from schoolbooks, Islamic manuscripts and mythology to confront ideas surrounding hunting.

The theme of the Iraq pavilion exhibition is the archaic. Within this concept, I was speculating about my body of work. This theme of hunting was always on my mind and I was thinking about it in a dialectic way. I considered that the hunter is the prey at the same time and that the prey is also simultaneously the hunter. It’s not about who kills who, rather it is about the relation between the meaning of the prey and the hunter. It’s about the dialectic between these two meanings. It’s impossible to be a hunter for nothing. You need to be hunted by something to follow it. Actually, you can’t be a hunter without being a prey. The relation of love is a very clear example. It’s not only in our daily life but within our history as well.

My work in the Iraq pavilion is a kind of indexing of the hunting process. That is why I use so many sources in this work. I was searching for images and texts, which can be perfectly used within this concept.

In our lives, it’s very difficult to assume that things are always specified. It is not just a dual relationship. Call it whatever you want, there are always layers, conditions, positions, mechanisms, and situations, between and around. There is no clear definition that says this is the relation between the hunter and the prey. You can look at them from the Hegelian standpoint and how he looked at the relation between master and slave. These kinds of relationships are made of multiple and complex layers that make a relation such as the hunter and prey open to be seen or approached from different sides.

When I was working on this series, politics was not on my mind. Any rule or relation in our history and time can be examined within the idea of hunting, including politics. So I was not specifically thinking about politics, politics is just a part of it. My attention was on the deeper ideas of mythology and history. Initially, war stems from politics, but eventually it overrides politics and becomes about co-resistance and human beings. That is why I didn’t pay too much attention to it.

Also, politics didn’t give me clear examples of the act of hunting. Politics need to become a kind of act to enable examples, such as war and contemporary occupy movements. These kind of political acts can give examples that relate to hunting and these examples are prevalent in my work, but not within the umbrella term of politics.

My work comes through many other sources like mythology and books such as Kitāb taḥāwīl sinī al-‘ālam by Abū Maʿshar al-Balkhi and Kitab suwar al-kawakib al-thabita (Book of the Images of the Fixed Stars) by ’Abd al-Rahman al-Suf, among others. These books talk about stars, but the images and illustrations exemplify the process of hunting. But within it the ideas of politics are prevalent. This concept is more about the philosophy about our existence than the philosophy of politics.

The destruction of the heritage affected and influenced me, yes. It made me work very closely with mythology and the many facets of Iraqi heritage and it can be seen through indexing in this work. I believe that it’s possible for the spirit or the idea of heritage to come alive again in another work, how I don’t know. It’s very painful not because I’m an Iraqi. There is more. It hurts me as an Iraqi because it’s a part of my heritage. I know these places, I’ve seen them, I’ve touched these objects, and it forms a part of my identity. But in another sphere, it hurts me more as a human being and as a thinker. In this way, it makes me think about our existence, about the meaning behind all this.

It is not easy to destroy a sculpture that is 2,000 – 3,000 years old. When you go to a museum and look at a 3,000 years old Greek sculpture, for instance, you imagine the person who created this work of art. Even though the sculptor is no longer with us, the sculpture still exists. The spirit of the person remains inside the sculpture. When you destroy the sculpture, you simultaneously destroy the spirit of the person who made it, and hence the person itself. You destroy a civilization built around this artist and the time between this sculptor and you. You lose the value of time, beauty and most importantly humanity.

The human condition is very complex and there is no clear image that represents it as it is. There is no pure black or white. In our life, there are multiple mechanisms that work, through and around us. These mechanisms enable us to create our thoughts, actions and choices. But we can find our way around understanding this condition through some ideas, images and concepts to examine the complex relations between all these conditions. If you look at the animated work in the I am the Hunter… I am the Prey series maybe you’ll feel this way because it is very fast and multilayered, in an attempt to divulge the human condition. But we can look at these complicated layers through concepts. So it is not impossible. There are disciplines like art and philosophy that try to seek answers to such questions that are at the heart of human existence.