White Rainbow Gallery in London is currently exhibiting the works of Japanese photographer Shigeo Anzaï in an exhibition entitled “Index I”, which will be on view until 23 January 2016. This is the first ever solo exhibition of the photographer in the United Kingdom, and acts as a precursor to “Index II”, Anzaï’s sister exhibition, which will launch on 17 May and run until 9 July 2016.

Anzaï was born in Atsugi city, Kanagawa, Japan in 1939. He gravitated towards photography in the late 1960s after beginning his career as an artist. He ardently documented the Mono-ha group, a movement that focused on the inter-relational co-dependence between natural and industrial materials. According to the Phaidon website,

The art movement of the early 1970s explored the encounter between, and the space surrounding, natural and industrial materials, such as stone, steel, glass, cotton, wood, wire, rope and water, arranging them in mostly unaltered, ephemeral states. It emerged in response to a number of social, cultural and political precedents set in the 1960s.

Anzaï’s career, spanning almost four decades during which he shot over 3000 works, documents this fragile relation and makes many of these works come to life, by allowing them to be seen in their original context.

In 1979, Anzaï received a fellowship and moved to New York. During his time there, he engaged and rubbed shoulders with the then emerging contemporary artists like Bill Viola and Laurie Anderson. The resultant work was the documentation of their performances at The Kitchen. Anzaï went on to document Documenta in Kassel, Germany and the Venice Biennale in Italy.

Anzaï’s works capture an important history that is relevant to the visual tradition captured by these artists, arresting the performativity of their work in progress. They allowed the visual documentation to serve as a piece in the puzzle and in turn these detailed images led to the establishment of his solo exhibition entitled “Personal Photo Archives” at the National Art Center, Tokyo in 2007.

Both the exhibitions – “Index I” and “Index II” at White Rainbow highlight different aspects of Anzaï’s practice, but are tied together through his preoccupation with being the active spectator. “Index I” is committed to exhibiting works that make Anzaï the witness to groundbreaking exhibitions and key cultural events that shaped the artistic landscape of 1970s and 1960s avant-garde Japan.

“Index II” documents the personal portraits of reputed international artists such as Hans Haacke, David Hockney, Yayoi Kusama and Nam June Paik, among others. Tying both the exhibitions together is Anzaï, the keen bystander, relaying each image with not just the image of the event or person, but also a bit of relevant context and personal history.

“Index I” uses the 10th Tokyo Biennale, which took place in 1970, as its centre stage and expands on the idea of the artwork as a work in continuum with the surroundings. The Tokyo Biennale, entitled “Between Man and Matter”, depicts the discursive engagements between Mono-ha artists like Jiro Takamatsu and Kishio Suga and Western artists like Klaus Rinke and Christo.

Anzaï played the pivotal role of assisting artists like Christo, Carl Andre, Daniel Buren and Richard Serra – a task that was assigned to him by the critic Yusuke Nakahara. The consequence of this liaison was an extensive body of documentation that grounded their performances and installations in an immersive set of photographic works, which serve as the only concrete product that grounds these happenings in materiality, enabling them to be relived.

Some of the works documented by Anzaï at the Biennale never actually came to fruition. One such work – a photograph depicting Richard Serra encircling an area on the ground, which was to be the site on which he would plant a tree – never actually was realised due to some unknown circumstance.

Another work by Christo, an ambitious project wherein he decided to drape the gallery space and the stairwell in fabric, was denied approval to be carried forward by the commissioner of the Biennale. However, consent or no consent, Christo decided to realise it anyway and the piece came to life for about 30 minutes, before it was taken down. 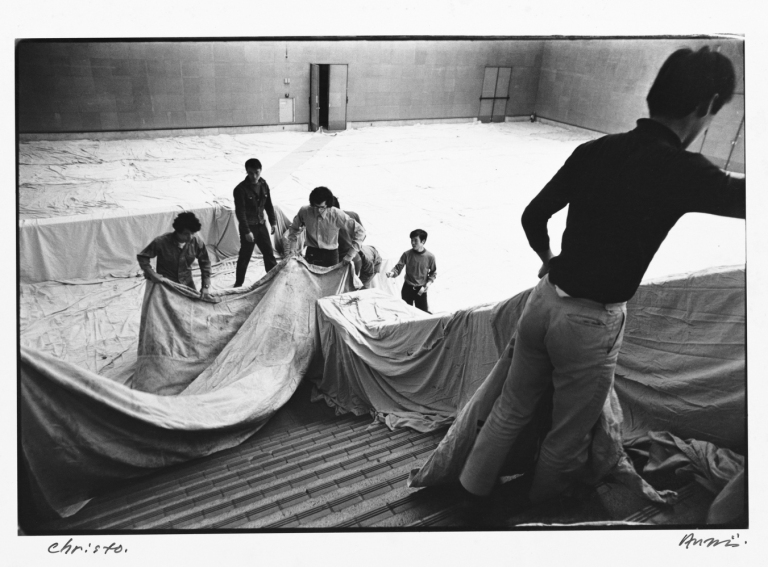 Anzaï’s keen skill captured this process from different angles – looking at the work from atop the stairs, catching Christo’s profile absorbed in the process of realising a short-lived vision, and then capturing it from the bottom of the stairs. Anzaï’s strategic documentation breathed life into this half hour-long piece, making it immortal forever. Thus Anzaï’s photographs serve as the only evidence that enables these works to continue to live on.

What differentiates Anzaï’s photographic investigations from a fly on the wall documentary approach, is that Anzaï embeds into his works a gentle humanism that reveals not only that bit more about the artworks, but also plays on the relationships shared by Anzaï and the artists at work. These photographs reveal a telling subjectivity that goes beyond the cold sterility of gallery catalogue documentation – a soulless work set against an austere backdrop. As one review crisply pointed out:

He worked to communicate artistic concepts, blending art and documentary photographs and elevating installation shots to the intimacy of portraiture.

Despite the artistic intensity of Anzaï’s works, the photographer himself eschews the term ‘artist’, and sees his practice more encompassing the ‘documentalist’ style. It is this diffused territory, between art and documentary approach to photography, that Anzaï occupies. While his works serve as a great art historical and archival source, the interplay of these keenly observed artistic subtleties makes his work evade categorisation, making them hover in realms of art, photography and documentation simultaneously.